The second project in Tilly Walnes’s Love At First Stitch* is Margot Pajama pants. When I suggested that I might make Alek a shirt, he told me he’d prefer I make him new pajama pants. Since pajama pants are usually very loose fitting and tend to be not very gendered, I made my first pair of Margot pants in his size. Then I moved on to making a pair using jersey fabric for myself.

I used the following supplies:

The patterns provided in Love At First Stitch are two sided. I knew I’d need to trace them out on something prior to cutting them. I found the swedish tracing paper on Amazon and decided to give it a try. I found that placing the tracing paper over the pattern on the floor and then tracing out the size I needed with a ball point pen worked really well. The pattern and paper were easy to realign either was bumped (by me or the dog).

The swedish tracing paper is more like very lightweight fabric than a real paper, so cutting it has a nice feel.

After cutting the fabric, I used cans of beans to hold the traced pattern down while using the tracing wheel to trace it onto the wrong side of the fabric.

After tracing it, I used my rotary cutter* to cut out the pattern. Following the steps in the book was straight forward. When I finished cutting the fabric, I was seriously intimidated. The pieces weren’t the same size and I thought I’d messed everything up. One key insight in the book is that when constructing clothing its important to align the raw edges, even if that means wrinkles in the fabric that isn’t along the edge, rather than make sure that the pieces lie flat. Given that insight, I pushed on giving it my best.

One place where I deviated from the book was when overstitching the final seam in the crotch. I just sewed them together rather than finishing each edge of the seam separately as recommend. That does mean my seams where the tie is coming out are unfinished. We’ll see how they old up over time.

I didn’t really feel like making a ribbon, so I just used twill tape that I happened to have in my notions drawer as a tie.

The pants came out well. They were a bit more tight in seat than Alek would have preferred, so next time I make PJs for him I’ll go up a size.

My pants were the first project I’ve ever used jersey for. Tilly warns in the book that the projects aren’t meant for jersey but I decided that for pajama pants, nothing could go terribly wrong.

The project started with trouble. It was impossible to double the fabric without it being wrinkled. I worked around that by just cutting each leg out separately rather than cutting through two layers of the fabric with one cut.

After I finished cutting, I grabbed a scrap to determine which needle would work best with the fabric. I found that anything smaller than a size 14/90 wouldn’t go through the fabric. The 14/90 seemed to work. As soon as the needle got dull though, the fabric started to jam below the throat plate.

Even after changing to a fresh needle, I had issues with the bottom hems. After I finished, I came across this Craftsy post which leads me to believe that my stitch width was wrong for the fabric. I’ll experiment some more to determine what width this fabric wants since I have about 1/2 yard left over.

For the tie in my own pants, I used a leftover Mass Drop ribbon from a fat quarter bundle. 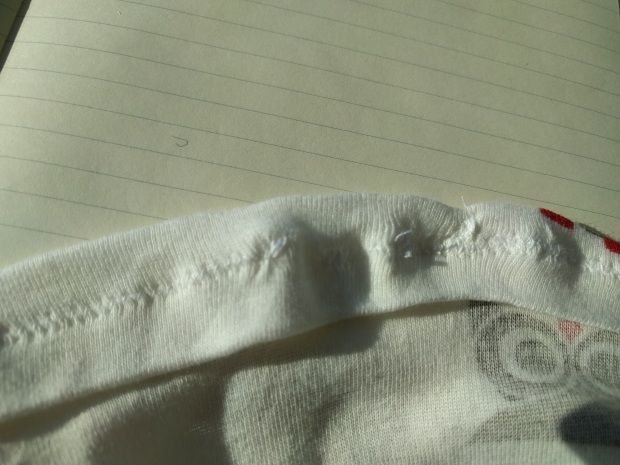 The bottom hem is problematic.

Overall this project was a fun, simple introduction to clothing construction. I learned quite a bit. I know now that I need to test out different stitch widths when working with jersey. I’d also like to learn a bit about lining pants, as the fabric on mine is a bit thin.

Also worth mentioning, this owl fabric is super comfy!

Check out my pants!

One thought on “Project: Margot Pajamas”