After some success with smaller projects, I decided that it might be time for me to start making stuff that I can wear. I wanted a book to give me a slow introduction to making clothing. The description of Tilly Walnes’s Love At First Stitch* was exactly what I was looking for.

The first project in Love At First Stitch is the Brigitte Scarf – Brigitte is a long head scarf with instructions to make a neck scarf as well. I made both scarves.

I used the following supplies:

The head scarf was straightforward. I spent about an hour before work making it. I decided to slant my edges since I thought I would like that look better.

I may have cut my edges a bit too much as the scarf ended up not fitting around my head. Determined to get something useful out of my pre-work hour, I cut a bit of elastic and attached the two edges together. 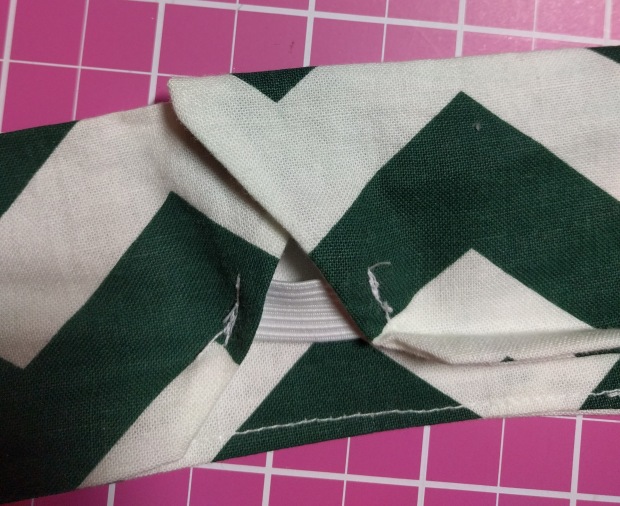 Better to salvage than scrap, right?

The elastic would look nicer sewn inside the seam, but my hair should generally cover the ugliness anyway. 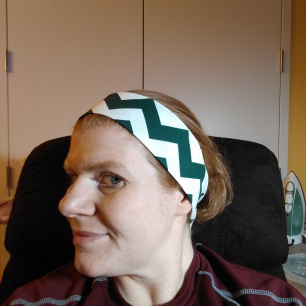 I’m pretty happy with the way the headband looks.  I’ll probably make more of these with the elastic inside the seam. This prototype was a tiny bit looser than I’d like (although still wearable).  Next time I’ll make the elastic strip a bit smaller.

The neck scarf was very similar to the napkins that I posted about last week. The differences from the napkins were that it was a bit larger and unlike the napkins, it didn’t have mitered corners. After having the head scarf come out a bit too small, I decided to go with the 32″ x 32″ neck scarf. My fabric pulled a bit on the first side that I stitched. I switched from a size 14/90 needle, which I used for the cotton headband, to a size 11/80 needle to stop the pulling. The larger needle was too much for this very light-weight fabric.

A neck scarf really isn’t my style but I decided that this would make a nice bandana!

My biggest take away from this project: if something doesn’t quite work out, roll with it.  I like to wear wide headbands while I’m working out – so I’m excited to use long scraps to make more of my own!

It was also pretty exciting to make my first wearable!